Freelancing Today was an Event held by iET and f-ective to give freelancers ideas and knowledge about „how to become a successful freelancer“.

Lara was one of the experts of this event and shared her expertise and experience on how to survive in an ever so tight marketplace with seemingly thousand of freelancers.

The other guestspeakers were Ivo Schweizer (iET), Jeroen van de Wetering (f ective) and Donald Putney (freelancer) which made for one great knowledge pool and discussion.

This article will sum up the event and answers your questions regarding freelancing.

This should be interesting for everybody who wants to dip their toes into freelancing:

The panel of experts

Some 30 people came to the event hosted by iET to learn and share their experience around “freelancing”.

The event was set up with a voting system that tracked the audience’s answers to the questions mentioned above.

The overall break down is in the image carousel below.

setting yourself up as freelancer

The first questions circled around understanding where the guest are currently working and what industry that might be.

Of the 30 guests in the audience only 5 are currently working as freelancers and 6 are contracted by an intermediary.

Therefore, half of the audience were really interested in joining the fold of freelancers.

The most discussed topic was of course the rates commanded by freelancers today. To the question of what “A freelancer which works as a “project leader/ manager” with 5 years of relevant working experience, can ask for a daily rate“.

With this information the experts went on to describe their experience and what they know is being paid in their respective industries today.

The result was that basically it always depends on the client and what he is willing to pay for his particular case and a general rule of thumb doesn’t exist.

your lifestyle as a freelancer

Another hot debated subject was about the lifestyle a freelancer leads.

For sure there are dozens of employees out there that believe the grass is greener on the other side when they glance over.

This was represented through the fact that 50% of the audience were interested in “freelancing” but not yet freelancers.

So, it was put to the vote with the following options to pick from:

Interestingly enough the general notion that freelancer work more than regular “folks” was not confirmed by only 3 votes in that category.

Only 5 attending freelancers worked less than 3 days for their respective clients and 6 freelancers were working the whole week.

This result begged the question of what that all meant and the opinion of the panel that there are quite some challenges prospective freelancers are not really aware of.

For one, getting a full time contract is not as easy as it seems.

Therefore, it stands to reason that instead most of those who voted less than a full week’s work weren’t doing it out of their consideration for “free time” but because the circumstances only offered contracts with less than a 100% work load.

Furthermore, the stress of finding a new project once your current job is completed is something not to be taken lightly.

This was the part most freelancers “hate” and isn’t “cherished” by anyone really.

Finding those opportunities and competing with the market place isn’t something that can be done without a lot of rejection and “thick” skin.

This led to the next questions about how does one develop his business?

Basically, this is what we call networking and the choices given were:

a) having lunches and drinks
b) attending meet-ups, (networking) events, courses
c) being active within online communities
d) Unfortunately, I don’t have time for networking
e) other…

Roughly 80% voted that they would have lunches and drinks or attend meet-up event or courses to build their network.

Being active within online communities was a close second to the meetups and shows that many are using the online world as much as offline to maximize their exposure.

It was made clear through the experts that this is part of the “hustle” that comes with being a freelancer and one should spend quality time on networking.

There is a saying that your “network is your net worth” and the panel couldn’t agree more.

At the end there was enough time to “network” around some nice finger food and start dipping the toes into building a strong network.

Lara successfully shared her experience of what it is being out there “on a contract”. She used her unique experience as an employer as much as a “freelancer” to convey the upsides and downsides of a freelancing life.

Overall, we loved the event, the setting and tools and the energy of the crowd. The quality of the questions as much as the experience of the panel.

We are looking forward to all our other events that are coming up and if anybody wants Lara to speak at their event, don’t be shy 😊 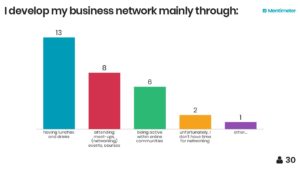 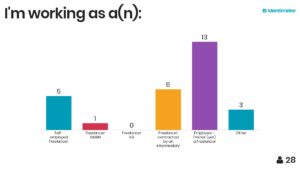 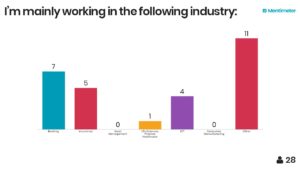 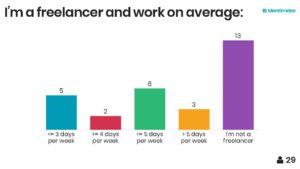 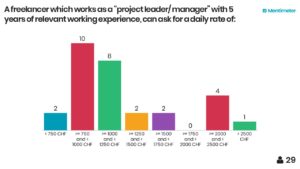 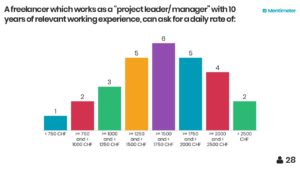 This is the video of the event for you:

Any cookies that may not be particularly necessary for the website to function and is used specifically to collect user personal data via analytics, ads, other embedded contents are termed as non-necessary cookies. It is mandatory to procure user consent prior to running these cookies on your website.